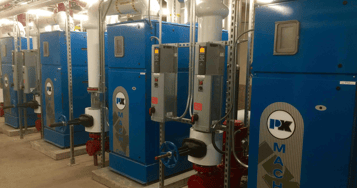 Boilers are Rated on Thermal Efficiency

Almost all boilers are tuned to add excess air, which ensures ideal combustion of the fuel for proper air-fuel mixing. The excess air can also prevent the burner from overheating by “pushing” the combustion flames off the burner.

When energy from the hot gasses is transferred to the boiler water, the gas temperature dips below the dew point, which causes vapor to become liquid. The energy released from the conversion is picked up by the boiler water and results in a significant boost in efficiency.  Every pound of condensate from flue gases condensing adds approximately 1000 btu’s to the boiler water. However, dry flue losses and loss of vapor can result in energy loss.

Energy loss can be readily calculated if the amount of CO2 and O2 in the flue gas and the stack temperature is known.

With the evolution of boiler technology, manufacturers have found a way to offer units with multiple firing rates, and units that can modulate seamlessly between fixed low fire rates and fixed high fire rates. The fixed fire rates are defined as the boiler turndown capacities, and modulation is accomplished by reducing the air and gas flow into the boiler.

The benefit of this modulation is threefold; it reduces cycle losses, it reduces the wear on the components, and it can potentially lead to higher thermal efficiencies.

This begs the fundamental question - wouldn’t a boiler with extreme turndowns be much more efficient than one with 5:1 turndown?  The answer to that is ‘NO’!

To achieve high turndowns the boilers are tuned to deliver greater amounts of excess air at low firing rates to keep the burner from overheating. The additional excess air will significantly reduce the dew point of the water in the flue gas and alter the losses in the dry gas.  To illustrate this effect, the example used in Figure A is updated to reflect a 20:1 turn down where the O2 is set to 11% (corresponding to a CO2 of 5.6% and 97% excess air).  The results are highlighted in Figure B below.

Note that the dew point has been lowered from 130.6° F to 117° F  and the boiler is no longer in the condensing range.  This represents a 3.7% DECREASE in overall efficiency and this is just the beginning of the bad news!

When excess air well above 50% is used in the boiler, it impacts the stability of the combustion flame which can lead to excessive flame failures, nuisance trips and cycle losses.

Realistic boiler modulation rates have helped improve the overall boiler system efficiency from reduced cycle losses and increased thermal effi­ciencies. Extreme turndown produces the opposite effect. Boil­er plant designs must factor in actual (not extrap­olated) boiler efficiencies through the firing range of the equipment and matching the expected plant loads with the right boiler size selections.

Interested in learning more? Reach out to us at pkmarketing@harsco.com.