What is Short-Cycling and How Can You Prevent it? 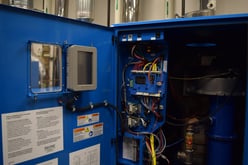 Short cycling occurs when a boiler powers down before being able to complete a typical boiler cycle and is called upon to satisfy a second call for heat, in quick succession. A typical boiler cycle consists of firing, post purge, idle period, pre-purge and then back to firing. Boiler short cycling can be seen in two critical areas; mechanical and economic.

In this blog, we discuss how this affects the boiler and how we can mitigate short cycling and losses incurred from it.

Mechanically, a boiler that short-cycles is putting undo stress on its components which could lead to early failure and a multitude of maintenance issues in a short period of time.  For instance, the burners inability to dry out from the condensing flue gasses in between cycles will most certainly lead to corrosion issues while gas valves could end up seeing what years of use in just a few short months would normally be. Other events typically associated with short cycling include nuisance shutdowns and unexplained flame failures that have fault codes with no easy identifiable cause.  A sure-fire way to wear down a boiler and have it fall well short of its warrantable life is to have it short-cycle.

There is also an economic price to pay for a short cycling boiler.  A short cycling boiler decreases efficiency up to fifteen points less than the lowest efficiency achieved in low fire.  For example, an atmospheric flex-tube boiler that achieves seventy-two percent efficiency at low fire will see a potential, and dramatic, drop to fifty-seven percent efficiency in a short-cycling mode, losing your performance efficiency while increasing your fuel consumption.  If you want an energy efficient boiler room design, we suggest that you include a plan to prevent short-cycling of your equipment.

How can you prevent short cycling?

The NURO® touch screen technology has the capability to prioritize the type and size of the boiler based on building load calculations, which creates a balanced firing cycle based on the buildings demand for heat. The ideal design is to have the boiler start no more than 4 to 6 times within an hour, which a short cycle protection parameter is in the control to prevent this.  The NURO® has this feature built in which gives it an advantage in this situation.

Developed by Patterson-Kelley engineers, designed to maximize the efficiency of your boiler, the NURO® is equipped with the latest in control technology.  Its Touch-Screen Control System’s ease of use ensures safe, efficient, and reliable boiler operation and performance year-after-year. Designed with algorithms to best adjust our boiler performance while minimizing conditions like short-cycling, night time versus daytime use, outdoor temperature adjustment, and prioritized operation in pre-determined operating modes.  In addition to controlling inside the boiler, the NURO® can control equipment adjacent to the appliance that also affect efficiency and performance such as pumps, valves and dampers to create a more comfortable heating system.

If the design is implemented with an over-sized boiler, by a large margin, there is not much that can be done. Building loads differ widely because of variations in architecture, use of space, magnitude of internal heat gains, and so on. Short cycling wastes a significant amount of fuel, at least 15% and often 50% or more.  In our experience, eliminating it has saved as much as 80! Short cycling is not a simple phenomenon. It arises from the interactions that take place between two or more of the processes described in this blog. There is no perfect equation, however; building demand in parallel with a proper size boiler, moving away from the “bigger is better” mentality, is key in prolonging the life of your system and maximizing savings.  For the spots in between, the NURO® is the ideal system for mitigation of short cycling in boilers.