Just like we would debate over sports, music, or politics, engineers have long held strong opinions about piping arrangements for hydronic heating systems.  Which is better:  Primary-Secondary or Variable Primary?  They each have their benefits, but most boiler manufacturers tend to side with Primary-Secondary.  Wouldn’t it be nice to have a different choice?

What is a Variable Primary Piping System?

In Variable Primary piping systems, there is one set of system pumps, generally piped in parallel, that distribute water through the heating equipment and terminal units.  Heat generated by the boilers is sent directly to the terminal units.  A Variable Primary piping arrangement can result in lower initial costs due to the installation of fewer pumps, less piping, less electrical, etc.  Variable Primary systems are generally considered to be more energy efficient. This is based solely on the concept that fewer pumps use less energy.  For any given installation these assumptions may or may not be true, but they are accepted when choosing between Variable Primary and Primary-Secondary piping arrangements.

What is a Primary-Secondary Piping System?

The Primary-Secondary piping arrangement includes two sets of pumps, system pumps and boiler pumps.  The system pumps distribute water to the terminal units and the boiler pumps circulate water through a loop that serves the heating equipment only.  The two piping systems are decoupled through what is commonly referred to as a “zero pressure bridge”, which hydraulically separates the boiler from the system. Traditionally, Primary-Secondary piping arrangements have meant full flow in the boiler loop and variable flow in the system loop.  Manufacturers tend to prefer Primary-Secondary because it ensures proper flow through the boiler.  Although a few manufacturers have boasted “Zero Flow” capabilities for their boilers, engineers know that no flow means no heat transfer; this begs the question, “why is the boiler firing?”  Engineers have begun to shy away from Primary-Secondary due to the perceived excessive pumping energy; but is that really the case? 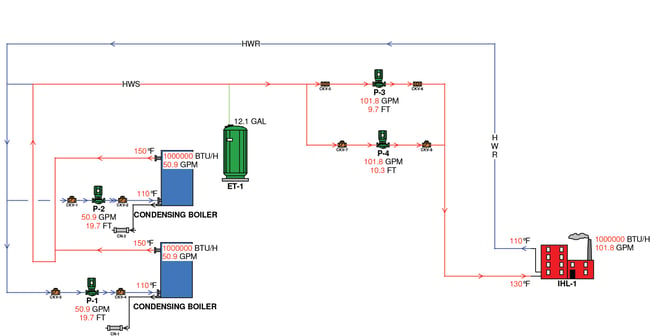 With the advancement of on-board boiler controls like the NURO®, there is now an additional option: Variable Primary-Variable Secondary.  The NURO® can vary the speed of your boiler pump, equipped with either a VFD or EC motor. As the boiler firing rate varies, the pump speed and flow adjust accordingly.  It’s the best of both worlds; flow rate ensured through the boiler, and energy savings associated with variable flow.  One might argue… "what about installation cost?"  Yes, there is slightly more piping associated with a Variable Primary-Variable Secondary piping arrangement, however, the installation cost is not significantly more.  Variable primary systems require a two-way control valve on each boiler to prohibit flow through an unfired boiler.  A boiler circulator with an EC motor is marginally more expensive than the control valve.

At PK we’re focused on developing controls to maximize the potential of our high efficiency boilers.  No longer are you left with only two choices.  Variable Primary-Variable Secondary piping arrangements are made easy with our on-board NURO® controller.